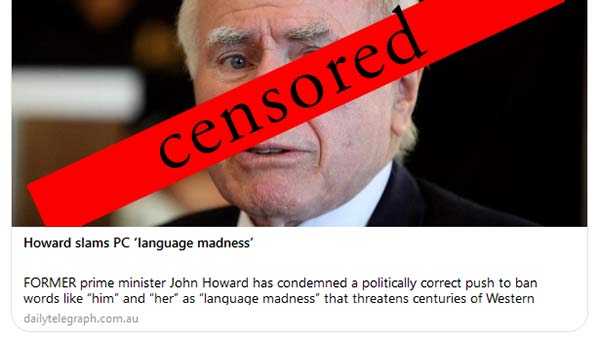 John Howard, Western civilisation, and a slap-down of our politically correct culture.

During his speech, he took a swipe at some current, gender ideology-driven trends that would go so far as to erase words like “boy” and “girl”.

Soon after, the Australian Family Coalition shared two related posts on Facebook, one from The Australian and one from the Daily Telegraph. The second post – on Mr Howard’s “gendered language” comments – performed so well that we paid for a Facebook boost (that is, paid to promote it to likely Facebook readers).

That post was racing along for an hour or more – and Facebook had “approved” the paid boost – when, all of a sudden, both posts simply vanished. Clicking on the links led to an error message saying the content was no longer available, and we were unable to view or moderate comments on the post.

Somewhat inexplicably, a small percentage of the public were still able to view it – but it was hidden from the AFC’s editorial team and most of the Facebook world.

There was no explanation provided from Facebook and no right of appeal. Curiously, the paid spend also continued for about 24 hours until we were able to turn it off. 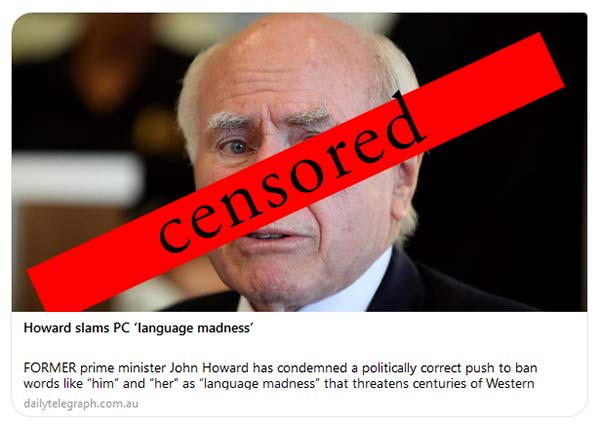 “They are becoming an editorial monolith,” she warned.

“We never allow traditional news organisations to get a monopoly on any one medium, but Facebook and Google control the lot.”

It’s worth noting that Facebook is a private business and is free to set its own terms of service. But in the face of allegations of bias against conservative opinion, it has trumpeted its supposedly balanced and impartial stance.

Given this claim, its near-monopoly in the sphere of social media, and the fact it has taken payment to promote “approved” posts, Facebook has undeniable responsibilities – responsibilities it seems to be failing to meet.

This thought is disturbing enough, but most concerning is the double-edged sword that is social media.

One on hand, never has it been so easy for diverse voices to be heard. Organisations like the Australian Family Coalition can reach an audience of thousands daily – something it could never have done in times past without a direct line to a newspaper, radio or TV station.

On the other hand, the concentration of activity in a small handful of sites (like Facebook) makes the monitoring – and even the influencing – of opinion possible at a completely new level. And that’s why we need to ask a favour.

Friends, please help us expand our voice beyond the social media sphere!

If you haven’t already signed up for our free email updates, please do so by clicking here.

And please also invite your friends to sign up using the following link: