It’s a sad day for freedom of speech in Australia, with the High Court rejecting the appeal of pro-lifers Kathy Clubb and Graham Preston.

Both were arrested, in separate incidents, for breaching exclusion zone legislation prohibiting abortion-related speech within 150m of abortion clinics.

Clubb, a mother of 13, was arrested in 2016 for handing out an information pamphlet to a couple outside a Melbourne abortion clinic. 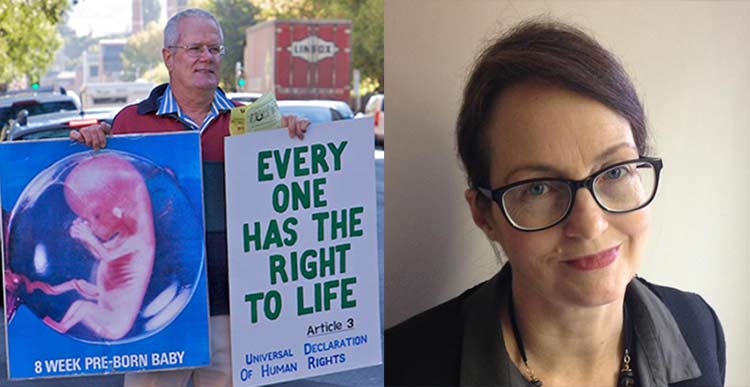 It's likely that Clubb and Preston will now be asked to pay legal and court costs for simply for trying to help save precious unborn babies - despite the taxpayer footing the bill in the Brown case.

After the verdict, Graham Preston held up a life-sized model of a 12-week-old unborn baby, telling the media that everybody can look at the model and see a human being.

“There’s no doubt that every abortion takes the life of a human child,” he said.

“We’re trying to speak up on their behalf. No matter how peacefully, no matter how calmly, you can be locked up for a year in jail for doing so. And that ought to scare everybody at this abuse of freedom of speech in this country.”

“It’s not enough that so many babies are being killed, but today, free speech is being killed as well,” she said.

Our thoughts and prayers go out to Kathy Clubb, Graham Preston and their families at this difficult time.

Friends, the Greens are currently trying to bring open-slather abortion, along with similar exclusion zone legislation, to South Australia.

If you haven’t already done so, please add your voice to the nearly 12,000 who have already signed our petition to South Australian parliamentarians.

Thanks to your combined voices, the Government has essentially admitted this legislation is very extreme and has referred the issue to the South Australian Law Reform Institute (SALRI) for consideration.

However, slight alterations are hardly going to make this bill more acceptable, and we must continue reminding South Australia’s MPs of this fact.

Please help us fight this extreme bill by sharing this link with like-minded friends and family, and asking them to also take a stand for the unborn.