Labor’s deputy leader Richard Marles has told the National Press Club that his party wants to assist in finding “life beyond earth”.

Yes, our alternative Deputy Prime Minister wants to find intelligent life somewhere else in the universe.

Couldn’t he find any in Canberra? He would have been hard-pressed if he was looking among his own ranks during a recent Senate debate.

Responding to the onward march of insane and mindboggling “gender-neutral” terms such as “chest-feeding”, One Nation Senator Malcolm Roberts brought a motion to Parliament.

It called for such ridiculous language to be banned from Government usage. Thankfully, the Government supported the move, and the motion was carried 33 votes to 31.

But that means that an astonishing 31 senators, including Labor, voted AGAINST the ban.

Among other things, the motion called on the Federal Government to:

“reject the use of distorted language such as gestational/non-gestational parent, chest-feeding, human milk, lactating parent, menstruators, birthing/non-birthing parent, and ensure all federal government and federal government funded agencies do not include these terms in their material, including legislation, websites, employee documentation and training materials”. 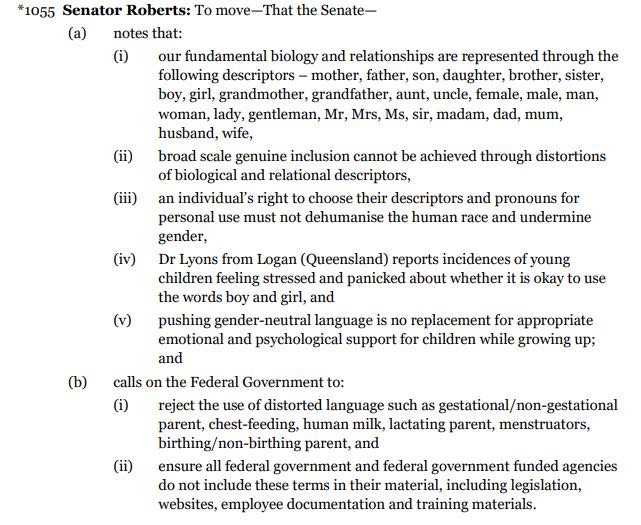 “I expect this sh*t from One Nation. But the Morrison Government just voted to support One Nation's disgusting, bigoted Senate motion trying to deny the identity of trans & non binary people. So the motion passed. What happened to governing for all Australians? Scumbags!”

It's hardly surprising that the Greens opposed the motion or engaged in this sort of rant. Par for the course, really.

But what’s truly alarming is that Australia’s alternative government, the Labor Party – currently leading opinion polls 52-48 on a two-party preferred basis – sided with the Greens against common sense.

Some may be tempted to look at the current state of affairs in Canberra and turn away. But that’s not the solution. It will only make things worse.

Now more than ever, we need common sense Australians to join and engage in the political process.

As Plato said more than two millennia ago:

“The price of apathy towards public affairs is to be ruled by evil men.”