“I will not be silenced”: Senator Claire Chandler to face anti-discrimination tribunal

Since her election last year, Tasmanian Liberal Senator Claire Chandler has been a voice for common sense.

Her public contributions on free speech and gender issues have been a welcome breath of fresh air.

But her thoughtful candour has now seen her receive an anti-discrimination complaint (from the same body, incidentally, that oversaw a complaint against Catholic Archbishop of Hobart Julian Porteous).

Senator Chandler spoke at length yesterday in the Federal Parliament, explaining the facts of the matter and providing a public response.

We share her speech below as it is worth reading in its entirety. 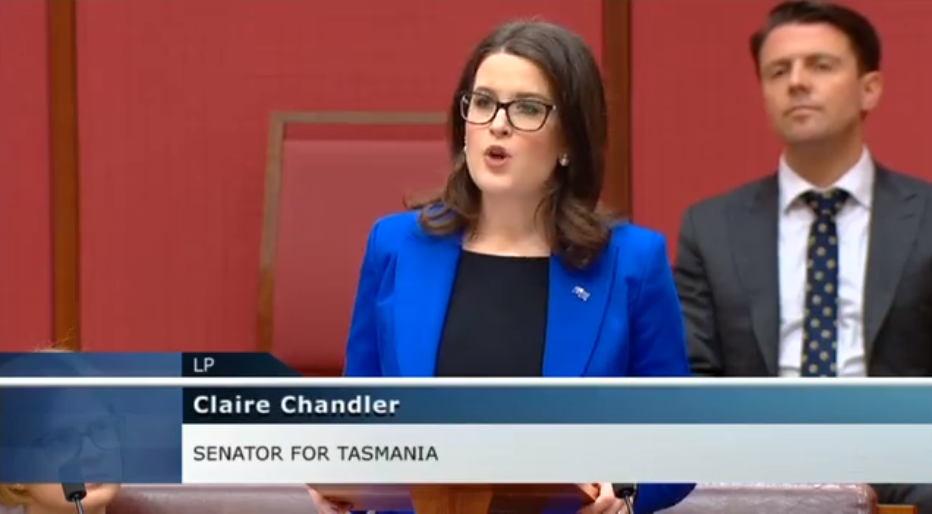 Last week in the Senate I spoke about World Rugby's efforts to defend the integrity and safety of women's sport by ensuring women's rugby is for female players.

Well, it didn't take long to get the answer to that question. The answer is that Australians are not free to acknowledge the realities of sex or to defend the integrity of women's sport.

Today I received a letter from the Tasmanian Equal Opportunity Commission, summoning me to attend a conciliation conference to answer for my statements on free speech and sex-based rights.

The complaint, made under the Tasmanian Anti-Discrimination Act, is in relation to an op-ed I had published in The Mercury earlier this year about, quite ironically, free speech.

My op-ed started: The recent publication of an open letter signed by 150 writers and academics in defence of free speech offers a glimmer of hope that we can put a stop to the anti-democratic cancel culture which has taken root in many corners of society.

Well, I'm not so sure about there being a glimmer of hope for free speech now.

The complaint letter I received today says, in referencing my actions: 'It is clear or can be inferred from her comments that she considers people who are born male and seek to live as a female should not have access to female toilets, facilities or sports. This is problematic because excluding someone who is designated male at birth and currently expresses their gender as female from single-sex facilities or sport may be direct discrimination on the basis of gender identity.'

It is open to the commissioner to dismiss the complaint as vexatious but without substance, but she has chosen instead to pursue it and to compel me to attend a compulsory mediation with the complainant.

Another part of the complaint relates to my response to an email I received after my op-ed on free speech was published. The email I received asked me to clarify if I understand the difference between sex and gender.

In my reply, I said: 'I do understand the difference. That's why I've made the point in my article that women's sports, women's toilets and women's changing rooms are designed for people of the female sex and should remain that way.'

The commissioner has found that this sentence could be considered offensive, intimidating, insulting, ridiculing or humiliating. The commissioner goes on to say in her letter to me, 'It is arguable that, following shifts towards unisex toilets, it is no longer necessary to have separate toilets based on sex.'

The complainant and indeed the anti-discrimination commissioner are perfectly free to disagree with me on this issue. Indeed, they are both perfectly free to never cast a vote for me as a senator for Tasmania if they don't wish to do so.

But I'm quite sure there are plenty of Tasmanians who do agree with me on this. They have every right to have their say and for their views to be represented in the federal parliament by people such as myself.

It is deeply concerning that, in a democracy, instead of using free speech to respond and perhaps even campaign against me in an election, some people are seeking to use the law to silence me and every Tasmanian who shares my concerns.

Being summoned by a quasi-judicial body to appear and explain why I say that males shouldn't be in female changing rooms or in female sporting competitions is an indictment on the state of free speech in this country.

It is yet another example of the assault on truth and the assault on the very meaning of the word 'woman' by activists who are determined to remove every sex based right that women around the world have and allow anyone who identifies as a woman into women's sports and women's spaces.

I will not be silenced. Unlike 24 million other Australians, I am fortunate to have this platform in our nation's parliament to be able to speak and be heard.

This complaint, just like the complaints and the legal actions in recent years against others for saying what they believe in, sends a clear and chilling message to every Australian—that free speech is dramatically under threat in this country.

It sends a message that if you say something that an activist movement somewhere doesn't like then you will be hauled before a tribunal and punished. And it sends a message that, no matter how ludicrous the demands of activists are, you must comply or face the consequences.

I and millions of others will not submit ourselves to the demands of those who deny reality.

I will not accept this outrageous incursion on the free speech of every Australian.


Sign up for our free emails HERE to stay informed!