Despite assurances during last year’s same-sex "marriage" campaign from "equality" activists and their fellow travellers in the media, the corporate world and the political arena, preserving our freedoms was not part of their agenda.

As soon as the "Yes" vote was won, the "equality" campaigners stopped pretending to care about our key freedoms - and the Dean Smith bill to change marriage went through Parliament virtually unamended.

So late in 2017, under significant pressure from a few good MPs and the majority of Coalition voters, PM Malcolm Turnbull announced an inquiry into religious freedom, chaired by former Attorney-General Philip Ruddock. 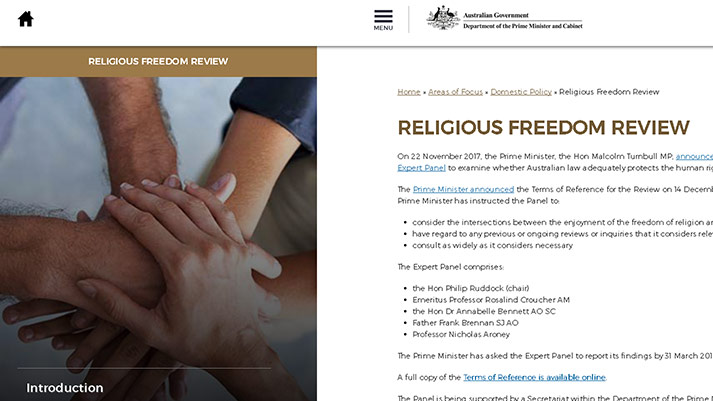 Due to report in March 2018, this inquiry is supposed to go some way to restoring the balance upset by the changed Marriage Act.

In undertaking its Review, the Prime Minister has instructed the Panel to:

Given it’s not a conventional parliamentary inquiry, and it concerns only religious freedom and not the other issues at risk (e.g. speech, parental rights), we need to be on the front foot. We must ensure that not only are our concerns heard, but they are also given voice and effect in the Federal Parliament.

That's where you come in. We urgently need as many Australians as possible to join the Australian Family Coalition in making an individual submission to this inquiry. Submissions don’t need to be long or be written in complex language – they can simply reflect your personal experiences and views.

To make this process as easy as possible, we have summarised all the information you need to make a submission on this page.

Submissions should be written in your own words and, where possible, should focus on why religious freedom matters personally to you, rather than using hypothetical situations.

You may also like to tell the panel why you think freedom of religion deserves formal, legal protection here in Australia.

The best options for making a submission are:

Please note that submissions are due by 14 February, 2018.

Once you have completed your submission, please thank the panel for this chance to contribute, and give your consent for your submission to be published by the panel among its public list of submissions received.

Thank you for helping defend religious freedom here in Australia!